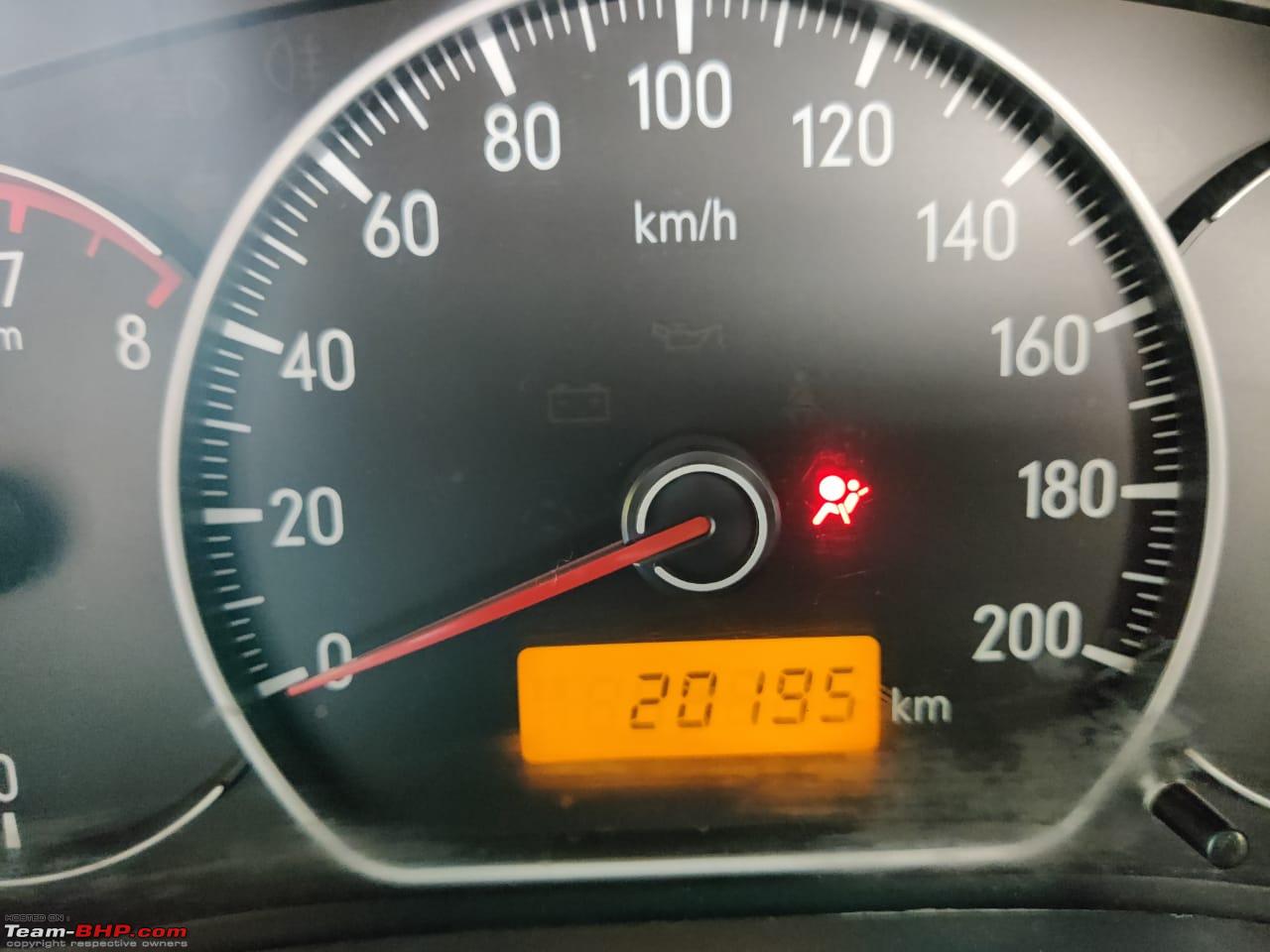 Airbag light is designed to protect you. Accidents happen. At home, in the office, everywhere. Put a human being and anything or anyone else together and you create a chance for accidents. Things created to increase efficiency inadvertently expose people to accidents. Automobiles are no different. It's why car manufacturers designed mechanisms to reduce accidents as well as protect occupants in the event of one.

Airbag in a crash[/caption]In this article, we will, with the help of an expert automobile mechanic, be discussing airbag light, its functions, and reset. But to aid well-rooted understanding, we will briefly review the general airbag system. Then, answer some frequently asked questions. So, let's begin.

Airbags[/caption]An airbag is a car passenger-restraint unit that employs extremely quick-response, inflatable bags during a collision. It also quickly deflates afterward. All this won't happen if the airbag light is on.

Back when SRS airbags were first installed in cars, manufacturers erroneously thought they would replace standard seat belts. It didn't, however, take long before everyone realized that airbags were better used as a supplement to seat belts. It's how it earned the prefixing term Supplemental Restraint System (SRS).

Like every other functional system in your automobile, the airbag system is made up of different components. You need to know these components and understand their respective functions if you hope to grasp the airbag workings.

A vehicle is a mobile machine with different parts. Some of these parts do the work to move the car, while a few others provide covering and housing. The airbag module belongs in the latter group. It houses the inflator and the airbag assembly.

It's the computer that oversees the airbag system.

They monitor the conditions leading up to any collision. It's these sensors that communicate the prevailing situation to the SRS module to deploy the airbag.

It's the cable that lets the steering wheel turn without breaking off the electrical link to the airbag module.

How do airbags work?

An airbag is the one thing that stands between you and hitting your head on the steering wheel or dashboard during collisions. It acts as a cushion. Generally, when your vehicle hits a stationary object or another vehicle head-on, it decelerates. This motion signals the accelerometer to trigger the airbag circuit through a heating element.

It's this heating element that aids the explosion inside the airbag that swiftly releases the harmless gas. While the produced gas is usually argon or nitrogen, the explosive element is sodium azide. The gas occupies the airbag and makes it expand. This is what protects the occupants from direct impact.

Airbag light is also referred to as SRS light. It’s the unit that signals to you that the airbag system has encountered a problem. You will usually see the light come up illuminating the ”SRS” signal in such cases. A few cars, however, use a figure of a stick affixed to a bag. Car owners should always pay attention to this notice.

To fully understand airbag light, however, you must first know the things that can cause it to come on and what you can do in response.

Why is my airbag light on?

An airbag light that’s on basically means that something is wrong with your car’s airbag system. It seldom comes on save for times when you are in an accident. Also can come on by accident and may just need a simple reset. However, there are a number of other reasons it can also come and they are as follows:

The car needs a backup battery to keep the data it gets. It continues to run even when the car is off. The airbag light can come on if this battery is depleted. You will have to install a new battery to repair the situation. The SRS light may correct itself thereafter and go off. But reset the sensor if it doesn’t.

There is a sensor that notifies the SRS system if someone is sitting at the front. What’s more, it also takes note of their weight. The sensor will deploy the passenger airbag to protect the occupants. However, this can’t happen if the sensor is defective and it can cause your airbag light to come on. A reset will often repair it. You can check out other car sensors here.

The clock spring sustains continuity between the car’s electrical wiring and the airbag on the driver’s side. Over time, it gets worn out leading to poor connection, which consequently results in airbag failure.

If water gets into your vehicle, it could reach the airbag module situated just underneath the two front seats. It can cause corrosion. Your SRS bag won’t work well and the light will come on.

Any interference with the seat belt latch that stops it from fastening will trigger the sensor monitoring it. You will need to manually remove the thing causing the interference. Spray compressed air into the buckle if you don’t see anything.

Is it safe to drive with the airbag light on?

Something is wrong if the airbag light is on. It means the SRS bag won’t deploy if there's a collision. A minor accident could lead to severe injuries and even death. And this is not safe by a stretch of reason. Always fix the issue, whatever it is, that caused the airbag light to come as soon as possible to avoid unpleasant situations.

How can I bypass my airbag light?

Don’t ever do this for any reason whatsoever. Understand that your airbag light is built in your vehicle’s system to protect and bypassing is removing that layer of protection. This can be potentially dangerous. Fix the issue that caused the SRS light to come on, don’t bypass it.

Can I reset the airbag light by disconnecting the battery?

Yes, but it depends on what has caused the light to come on. It will work if there was no accident or structural damage to any of the airbag system components. That is to say, the airbag light came on by chance. Here’s how to do it:Find the car battery. The negative and positive terminals have (-) and (+) respectively. Unscrew the nut on the negative terminal. Then, remove the terminal clam and thereafter leave it disconnected for a while, typically anywhere between 5 - 10 seconds.

This leaves time for the airbag sensor to reset. Reconnect the battery and turn your vehicle to see if it has gone off. If it persists, you will need to use a scanner for more comprehensive diagnostics. Check here on how you can reset the check engine light without tools.

How do I reset the airbag light with a scanner?

By now, you know what an airbag does and the several reasons why an airbag light will come on. Now, you should know how to reset the airbag light using a scanner.

Pro tip: This will be a step-by-step guide with pictures. It will be easy to follow and replicate. However, it's also fine if you're sure you can pull it off. In such a case, take your car to the nearest ACE-certified mechanic to fix it. The steps are as follows:

First of all, this is for cars that have a passenger seat Airbag on/off switch. It's the first thing you check before you start. If someone mistakenly turned it off, it could explain why your airbag light is on. In which case you would only have to switch it back on and your airbag light will go off. The switch is located on the dashboard in front of the passenger seat.

But if the switch is rightfully on or your car doesn't have the switch, to begin with, skip to step 2.

The airbag system will have trouble code notification if there's a problem. Start your troubleshooting and read it. Again, always ensure you solve the issue before you clear the code.

You will be tempted to just reset the airbag light, but don’t. Always fix the problem before you reset, otherwise, it will persist. Do it yourself if you’re sure you can. Take it to a professional if you can’t. But do it all the same. In any case, remember to always disconnect the battery during the repair process.

Once you’re done with repair or installation and are sure everything is in order, it’s time to clear the error code. You can only do this using an OBD2 scanner, you can’t do it any other way. When you successfully rest the airbag, you will see it disappear from the dashboard. However, if the codes persist, reread.

This is the last step. You will have to turn on your car and test drive it. If the airbag light goes off, then your problem is probably solved.

Will removing the airbag fuse disable the airbag?

Yes, it will. It will, however, mean that the airbag won’t deploy in case of an accident.

Can a blown fuse cause the airbag light to come on?

Yes, fuse 13 in particular. Also, it could cause the windshield wiper not to work.

In conclusion, airbags are important in every vehicle. They join forces with the brakes and seat belts to ensure the optimal safety of occupants. But it can easily become faulty and the airbag light notifies you. Once it comes, it means something is wrong with your airbag system. Always pay attention to it. By now, you have all you need to maintain your airbag light and the whole airbag system.