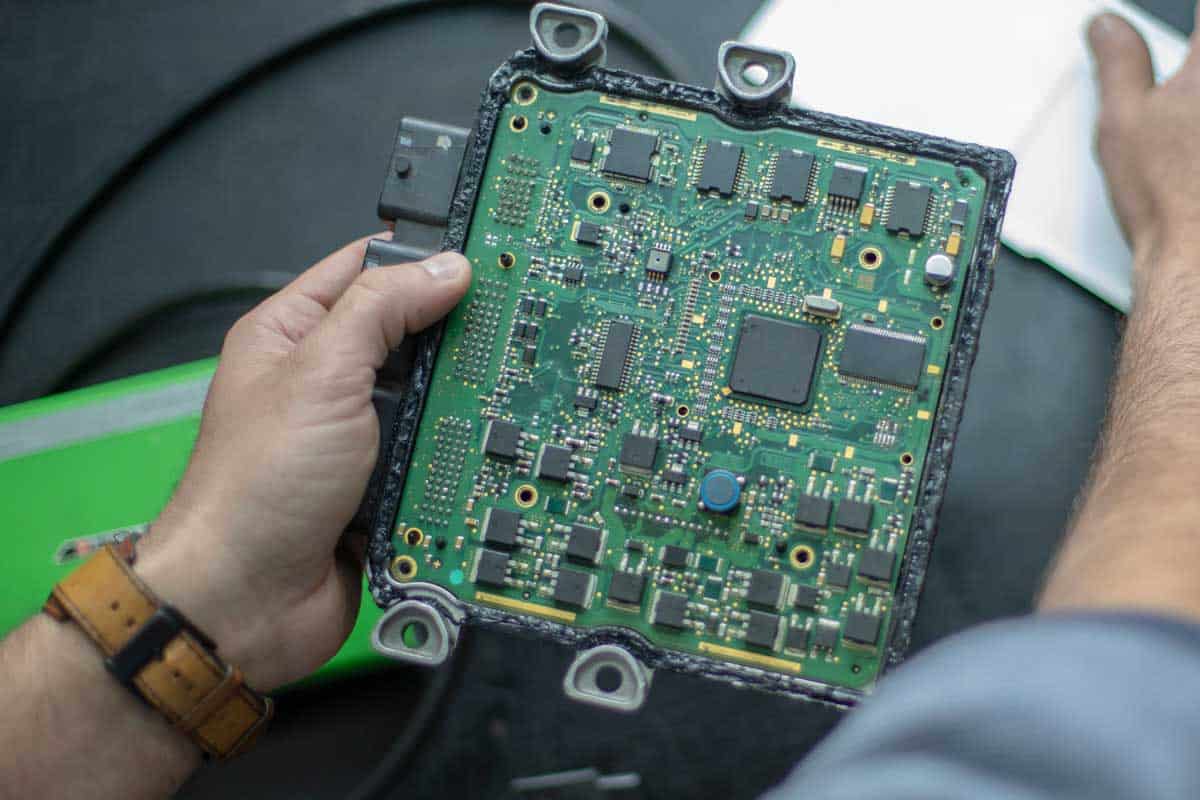 Also known as ECU, the electronic control unit is the brain of your vehicle. This is the reason most technicians and car users commonly call it the car brainbox. The ECU controls most of the functions of the modern-day car. Automation of vehicles allows the driver to focus more on driving while the car takes care of itself.

Brainboxes have been in cars for a while. Its existence in vehicles goes as far back as the history of automobiles. So far, it has continued to advance even as modern vehicles advance. While it controlled only a few parts in older cars, the ECU now controls almost all components.

What is an electronic control unit (ECU)?

A car brainbox or electronic control unit, abbreviated as ECU, is an automotive device that regulates the electrical functions in the car. It electronically receives data from component sensors and uses that information to carry out changes to the engine component. The brain box is factory-installed in all modern vehicles where it controls nearly all the working components.

What's more? The ECU of every car is programmed to discern the functioning condition of the car's components. Hence, the sensors, like the knock sensor, for example, relay to the brainbox if there is a change. For instance, users will see an error message on the instrument cluster (car dashboard) if a component is faulty.

The brain is the central nervous system of the human body. It directs all the activities of the body. The electronic control unit serves the same functions in cars. It's an embedded automated system that controls the electronic systems and sub-systems of automobiles.The ECU that comes with modern cars can basically understand the state of the camshafts, ignition timing, throttle, fuel injection timing, and wastegate pressure. Before now, most of these functions were set manually and managed mechanically and pneumatically.

Introduced in the 1970s, PCM stands for powertrain control module. It's used in older vehicles that didn't have ECU. It works by combining the functionalities of an electronic control unit (ECU) and a transmission control unit (TCU). Like the ECU, the PCM determines the gear change and some other functions.

The working principle of a car brainbox is straightforward to understand. First of all, the device is placed in a safe place inside the car. The brain box gets to work as soon as the ignition comes on. Each functional component of the vehicle is fitted with sensors.

These sensors relay information from the said component to the ECU. The brainbox uses the collected information to respond accordingly to the component issue at hand. The ECU will notify you if there's a problem with your car.

Where is ECU located in a car?

A car brainbox is quite a delicate device and as such is kept in a secure place in the automobile. Automobile makers put it in a place where it won't be reached easily. As a result, the device remains in good shape. The location differs in different cars.The following are likely places where the brainbox could be located in your vehicle:

Functions of an ECU

As the control center, the electronic control unit of your car performs a whole collection of functions. The major ones are as follows:

The electronic control unit interfaces with every management sensor of the engine. It's how the ECU manages to control fuel, timing, as well as other related components in real-time while driving. As a result, it can detect issues using engine sensors and notify you by generating trouble codes.For instance, a problem in the engine will cause the check engine light to come on. Once this happens, it's time to take your car to an ACE-certified mechanic for examination. Car brainboxes use the prewritten program to ensure all parts of the engine work efficiently.

It manages the gas pedal position at idling

As mentioned before, most functions of modern vehicles are automated, thanks to the brainbox. A car's ECU typically monitors and directs engine functions like determining the position of the gas pedal at idling. With the aid of the throttle position sensor, ECU helps the car to determine how much gas to pump into your engine in relation to the throttle received when you step on the accelerator.

Also, the ECU manages car transmissions. When you're driving an automatic transmission, the car brainbox essentially informs your vehicle when it should switch gears. It calibrates the car gear ratio depending on whether it's on reversed drive or overdrive.

Some electronic control units, especially the modern ones, also control other car functions like windows, door locks, and sunroof. They essentially control every accessory in/on your vehicle.

Whenever any of your car components encounter trouble, the ECU will detect it and generate a trouble code. This will cause the check engine or maintenance required light to come on. Once you see this light come on, take the car for examination.

You can use an OBD scan tool to check it by yourself, but you will need some technical know-how. You may want to save yourself the trouble and take it to the nearest mechanic.What you or the mechanic will do is connect your car to an OBD scan tool. It will register all error codes generated.

Once you locate where the error is coming from, you will commence all necessary repairs effectively.Sadly, it may be your ECU that's malfunctioning. Depending on the damage, you will need to repair or replace it. For instance, a corroded motherboard will require total replacement, whereas a sensor block may be repaired.

What can cause ECU failure?

A car brainbox controls virtually all functions in your vehicle. If something were to go wrong with your car, it wouldn't take you too long to find that the ECU is the culprit. What's more puzzling, however, is how the ECU failed in the first place. Several things could be responsible for this. Below are the top five:

The ECU practically relies on the electronic cells of the car battery to function. The brainbox will soon likely fail if your car battery runs out of all its cells. Consequently, your entire car, including the ECU, will pack up.Also, you will want to avoid removing the battery head while your car key is in the ignition switch. It could damage the ECU system of the car.

All ECU comes sealed. The seal is to prevent moisture from getting inside. However, wear and tear from years of service can break this seal, making it likely for moisture to get in. This can potentially be disastrous. Soon, corrosion will start to form on the components. In no time, this can continue to build up and eventually cause a car's brainbox to fail.

A typical car ECU is supposed to have 9 volts, although 12 volts is preferable. You can confirm the voltage amount through wiring that goes up to the ECU's harness. If the voltmeter gauge detects a voltage of 6 or less, it may spell problems for your ECU.

Make sure that the jumper cables are properly attached before you perform a jump start on your battery. It could short out your ECU if it's done incorrectly. If you're lucky, you will only need to repair it. Otherwise, you will have to replace it.

Lastly, don't leave any naked wiring anywhere in your car. Ensure they are all taped or properly insulated in some way. Any such exposure can lead to short-circuiting, which will most likely damage the ECU.

Symptoms of a damaged ECU

Typically, a failing or faulty car brainbox will show a few signs that can notify the driver of a potential issue. Below are some of these issues:

Something may be wrong with your ECU if your check engine light comes on. The light generally comes on when the computer detects an issue with a sensor or circuit. Scanning the computer with an OBD scanner tool can confirm if the problem is from the brainbox or another car component.

Note: There are, of course, times when the ECU illuminates the Check Engine Light in error. A scanner will also reveal if this is the case.

A failing ECU can cause erratic behaviors in engines. The vehicle may stall or misfire at starting. This symptom may occur intermittently without a set pattern.

Recall that ECU controls nearly all functions in modern cars. Vehicles may start having engine performance problems if something is wrong with the ECU. For instance, the fuel settings of the engine may go off resulting in poor fuel mileage. The same thing can be seen in acceleration and power as the issue worsens.

A bad ECU may make your car difficult to start. The car may not start at all if the ECU is completely damaged as this effectively leaves the car with no engine management system. The engine may still crank in response to your starting efforts, but the car won't come on. It's not unusual for this problem to lead to other ones.

‍Note: Other mechanical issues can also cause these listed symptoms. So, always make sure that all mechanical possibilities are eliminated before you decide to repair or replace your car's brainbox.

Is ECM different from ECU?

While ECU stands for the electronic control unit, ECM stands for the engine control module (ECM). Generally, they both mean the same thing. Precisely, however, ECM is a type of ECU that controls a set of actuators in an internal combustion engine. It achieves this by collecting values from several sensors inside the engine bay. ECM interprets this data with the aid of a multidimensional performance map.

Can you drive with a bad ECM?

It depends on how bad the damage is. If the ECM is still failing, it may become difficult for your car to start. A more considerable failure may cause the car not to start at all.

Yes, you can repair them. Although, it depends on the damage. If it's, for example, a worn wire, it can be repaired. On the other hand, you will have to replace it if it's s more fatal damage.

Can you replace the ECM/ECU by yourself?

No, and you shouldn't try. The electronic systems that come with modern cars are quite sophisticated. They can be complex to understand, making diagnosis difficult for a layman. So, a replacement procedure is not something you want to carelessly embark on. You will need considerable know-how. Let professionals handle it.

How long does it take to replace the ECU?

A professional mechanic will take about an hour or two to replace an ECU.

What happens if you unplug the ECU?

Unplugging an ECU will reset it.

It depends. For instance, disconnecting the battery for a short time may not reset the ECU system because of the residual current. But if you wait to give it a few minutes (more than five), the brainbox will more likely reset.

Can you swap ECU from car to car?

Yes, you can swap an ECU from one car into another if it's the same model. If it's, however, not an open-source ECU, you may have to reprogram it to get it to work.

The brainbox is a timeless automobile invention. We have explained in this article the meaning of ECU, functions, how they work, and symptoms of a failing one. We have also answered some frequently asked questions. Nevertheless, one thing deserves one more mention: always take all your ECU problems to a professional mechanic.